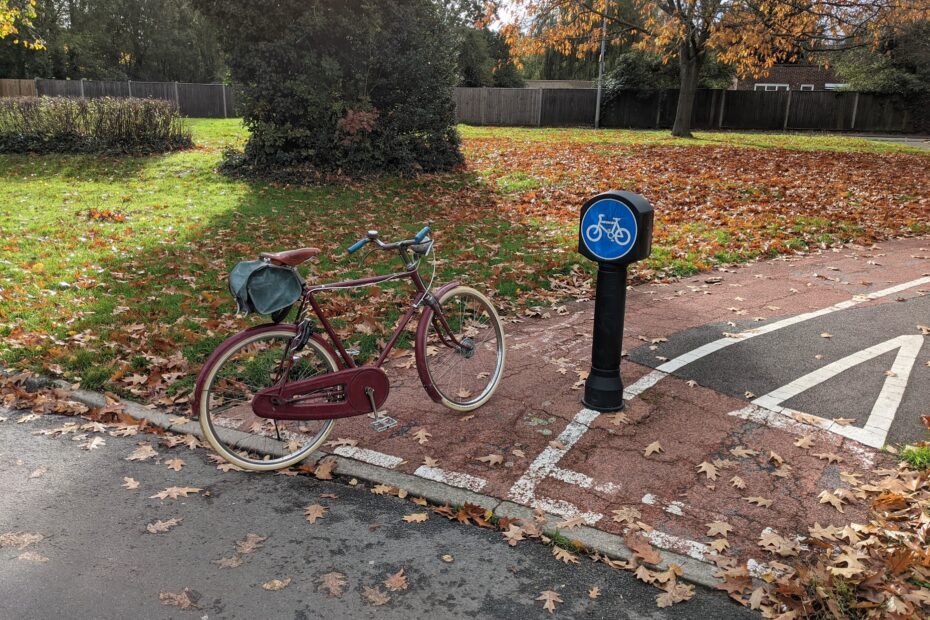 For our second look at the rubbish infrastructure of Epping Forest, we unfortunately find ourselves at Loughton’s only purpose-built cycle track – on Rectory Lane.

Rectory Lane is a fast moving and poorly surfaced road which forms the main traffic route between Loughton’s two shopping Centres (The High Road and The Broadway) and between the district’s two motorways, J5 of the M11 on Chigwell Lane and J26 of the M25 at Waltham Abbey. A segregated cycle route is definitely warranted here.

As pictured, the path is signposted as a cycle path, with a white cycle in a blue circle, not as a shared use or divided path. This is reasonable as the path is too narrow for shared use, but with the cycle path being a far more direct route than the nearby footpaths, it sees significant pedestrian use.

A couple of hundred yards further on we reach the first give way, where the path stops at the pavement beside Pyrles Lane. There is an awkward double give way to first pedestrians and then two lanes of motor traffic while crossing what is a shockingly wide road given its context as a route into the Debden housing estate. The path here is sufficiently set back that there is enough space to give cycles priority and have cars give way to the cycle path and Rectory Lane motor traffic separately, but alas this is not the case.

Too narrow to offer refuge and too wide to encourage safe speeds, the hatched section in the middle here is a prime example of bad road layout. There isn’t even any signage to warn drivers of crossing cycles.

Pyrles Lane is a busy road and waiting cars often tail back to obstruct the paths of crossing cycles. We can also see that the road isn’t draining properly, leaving a pool of mud for riders and pedestrians to traverse.

Next we have the longest section of the path, it’s a nice run and while it has a significant hill in it, that’s largely unavoidable and most bikes do have gears for such eventualities. This stretch benefits from a number of beautiful mature trees, however these need more attention than they get as their low hanging branches sit at the right height to hit the heads of any riders not tucking into an aggressive aerodynamic position as they descend the hill.

Unfortunately, there is no footpath on this side of the road (the cycle path still being just a cycle path) and so pedestrians frequent the cycleway; and who can blame them when there is nowhere to cross the road safely?

The next give way is a path from the back of a block of flats, a useful path I’m sure but with poor sightlines it does have the potential to be quite dangerous. Note the well worn give way markings.

Another give way as we arrive at Hillyfields, another mud trap in the gutter of the road and a very steep pavement to climb, we reach the penultimate stretch of the path. Here there is a footpath and even a bus stop with plenty of space for all road users. We pass the Bus Stop and cross (without priority) the entrance to some commercial units to reach the final section of the path.

We have a beautiful tree here, but the grass around it is spoilt by an at-present pointless strip of tarmac.

At the end of the small strip, there is the end. Some pavement which it is generally illegal to cycle on, and some railings to prevent cycles from merging onto the road. Quite what the designers expected cycles to do at this point is a mystery to EFTAG – presumably turn around and ride back to the aforementioned property entrance to reach the road.

Trapped. The railing epitomises this expensive but poorly thought out piece of infrastructure. It could be a vital link facilitating active travel, instead it is a well obstructed route from someone’s house to the wrong side of some railings. EFTAG would love to see it fixed and has ideas for how it could be done.

This site uses Akismet to reduce spam. Learn how your comment data is processed.